I spend so much time arguing with people about the graphics they post on Facebook that I figured I should at least make a blog post out of it so I can pretend it’s productive.

Here’s an image I got from a few places earlier this week. The title was something like “Hours Working Per Week At Minimum Wage Needed To Afford A Two-Bedroom Apartment In Different States”, and it was usually associated with some text about how it was outrageous that the minimum wage isn’t nearly enough to live on: 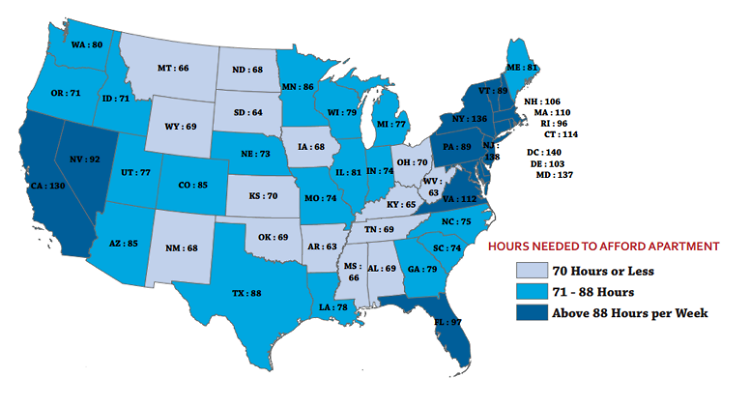 At first glance – and this is how everyone I talked to interpreted it – this seems to support the “minimum wage is unliveable” hypothesis in a big way. In my home state of California, for example, it looks like a minimum wage earner needs to work 130 hours a week just to be able to pay for a place to live. That translates into working nineteen hour days seven days a week. And if you need that ridiculous schedule just to pay rent, it doesn’t seem to leave a lot of room left over for anything else.

California might be an unfair example because it’s particularly high. The state I’m visiting right now, Utah, is a bit more representative, at 77 hours/week. But even this requires eleven hours a day, seven days a week. So people’s outrage seems justified.

The second catch is related to the first catch: there is no way raising minimum wage could solve this problem. For example, suppose we decided that it was unfair to make people work more than the standard forty hour workweek. What level could we set minimum wage in order to achieve this noble-sounding goal? In California, we would have to multiply the minimum wage by 3.25x, making it $26/hour. I think even most leftists would start to worry that might cause certain problems down the line.

So I Googled this until I finally found an article in the New York Times where this image had previously appeared, which unlike every instantiation of the image I have seen on Facebook explains the methodology. The numbers are not about how many hours are needed to pay for rent, they’re about how many hours are needed to afford rent, where afford is arbitrarily defined as “be able to pay for rent using no more than 30% of your income”. This brings the cost of a California apartment in the sense everyone is naturally interpreting the picture as meaning back to a slightly-less-unreasonable $1250/month and brings the number of hours per week our hypothetical minimum wage laborer needs to work to pay for rent down to 39 – still worrying, but markedly less so (her Utah counterpart only needs 23.1, which actually sounds doable and liveable).

But we’re still not done here. The graphic specifies that we’re affording a two-bedroom apartment. The best reason to demand a two bedroom apartment is that you are, in fact, two people. Suppose we’re talking about a couple, both of whom earn minimum wage. Now each partner in California only has to work 19.5 hours per week. Each partner in Utah only needs 11.5. This is starting to sound pretty good.

Can we bring these numbers down further? We might note that even if the average California apartment requires 19.5 hours/week, a minimum wage earner might not be going for the average apartment. They might be after something more modest. How much does a modest apartment cost?

I briefly wondered whether the Internet would be able to tell me which Californian county had the exact median land value for California. Then I remembered this is the 21st century and went straight to Wikipedia’s list of California locations by per capita income, which ought to track land value well enough. The exact median is Amador, but since I don’t know where that is I chose Sacramento, which is just next to the median, as my experiment. I asked http://sacramento.apartmenthomeliving.com/ to tell me the rent of two bedroom apartments in Sacramento. Its “sort by price” feature is hopelessly buggy, so I wasn’t able to find an exact median, but I am prepared to believe it is about the $1040 the graphic suggests. And yet it is easy enough to find decent 2 bedroom apartments for as little as $650. If we pretend this case is typical, we can declare that a cheap (but liveable) apartment costs about 62.5% of an average apartment. That means each partner in the Californian couple only has to work 12.2 hours/week, and each partner in Utah only has to work 7.2 hours/week.

In fact, these are still overestimates for a bunch of reasons. Minimum wage earners are probably concentrated disproportionately in poorer areas of a state, so taking the exact median area of a state overestimates the affordability challenges minimum wage earners face. Most couples share a bed, so they’re probably not after a two bedroom apartment and can look for a cheaper one bedroom apartment. And if they really need to, they can do what my roommates do, which is move into a larger house with more rooms and split up the rent even more. In my own living arrangement (two bedroom house where one bedroom is occupied by a couple and the other is occupied by a single person), each partner of the couple only has to work half as hard as the partners in the couple above.

But let’s ignore these additional factors and conclude with our 12.2 number for California. Note that this is less than a tenth of the number on the original graphic, and is probably a heck of a lot closer to what people think when they read what the graphic is trying to do.

I don’t mean to trivialize the problems that minimum wage earners go through trying to pay rent, and certainly not the problems they would go through if they don’t work full-time, or are supporting a non-working family member. It’s just that this image has nothing to do with these problems and its numbers might as well be generated with random dice rolls for all the good they do anyone.

This entry was posted in Uncategorized and tagged facebook, lies damned lies and, statistics. Bookmark the permalink.
← Against Anton-Wilsonism
Lies, Damned Lies, And Facebook (Part 2 of ∞) →